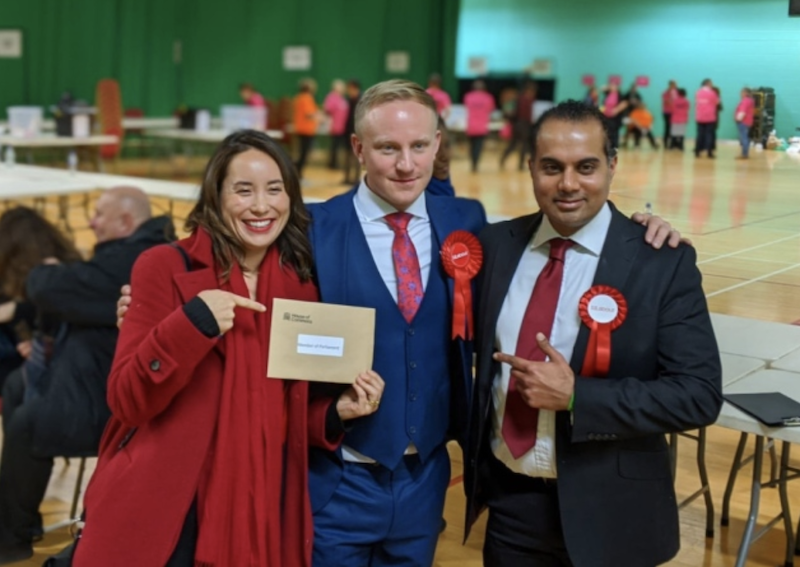 It’s the honour of my life to represent the place that I come from – Ilford South – in Parliament. Every day my amazing team of over a hundred volunteers inspired me – we have built a new movement locally, and we will continue to build so we can strengthen our community against the divisive politics that will be unleashed by the Tories. Here is what I said on election night in my speech:

“First of all I’d like to thank everyone who gave their time and energy to work on my campaign. This has been one of the most inclusive campaigns this constituency has ever seen, with every community, ethnic and religious group represented in my team. It showcased the best of Ilford, the best of Redbridge, and the very best of modern Britain. I also like to thank all of the hardworking council staff, police and volunteers who were involved in organising this count and ensuring that democracy always prevails, whatever the result.

“I’m so humbled that every corner of this constituency has shown such faith in me. I promise that I will deliver on my word for each and every one of you. It will be the honour of my life to represent the community I grew up in, where I went to school, where I had my first job, where I first joined a trade union, and where I organised my first political meeting as a 21-year-old and later joined the Labour Party.

“I’d like to also pay tribute to Mike Gapes for his 27 years as an MP for this constituency. While we may have disagreed politically on some fundamental issues, he worked incredibly hard to represent his constituents in Parliament, and helped thousands of local residents through his casework.

“But while I take great pride in representing the constituency I grew up in, it’s not about me. Tonight has obviously been an incredibly difficult night nationally for Labour, and I feel deeply sad that we as a Party will now not have the opportunity to deliver one of the most radical manifestos in decades. A manifesto that overwhelmingly set out a bold vision to rebuild and transform every corner of our nation. A programme that offered hope for every man, woman and child in this country. Hope, of a better tomorrow.

“There are many lessons to learn from this campaign but, what’s clear, is that many people who previously believed in us across our country, have moved away from us.
I believe that they have been sold a lie; the lie that Tories stand for the working people of this country. They never have and they never will. My fear now is that this country will become increasingly divided as this government pushes ahead with its plans for a Brexit that prioritises global corporations over its citizens.

“A government that has spent the past decade savaging this country with a brutal programme of austerity that has left millions of Britons on the scrap heap; demonised refugees and migrants, increasingly privatised our national health service, dismantled workers’ rights that our trade unions have fought so hard under successive Labour governments to enshrine, and slashed taxes for the super rich. All driven through on a mantra of racism, discrimination and division.

“But I’d like to make clear right here and now that we as a Party will continue to fight for what we believe in, and the people that desperately need a Labour government are not forgotten.

“The policies we put forward were popular, transformative, and and will one day be realised if we are to have any chance of ending record levels of inequality in our community and stop the devastating impact of climate change.

“In five years time people who have been crushed by the Tories for so long will be even worse off, with our public services decimated, communities wounded, millions living in poverty – so – we need to be ready, as a Party and as a movement, to learn the difficult lessons, to respond, and to win back our heartlands outside our big cities, to ensure that it is Labour that restores hope, dignity and pride to working class communities across the United Kingdom.”